The goal of this project is to create a dance pad designed to play the “Dance Dance Revolution” game commonly found in arcades. The dance pad will consist of a large 3x3 grid with up, down, left, and right arrows which will serve as large buttons. When playing the game, users can step on the large buttons, which will cause an interrupt to send a keystroke over Bluetooth to the computer running the game. 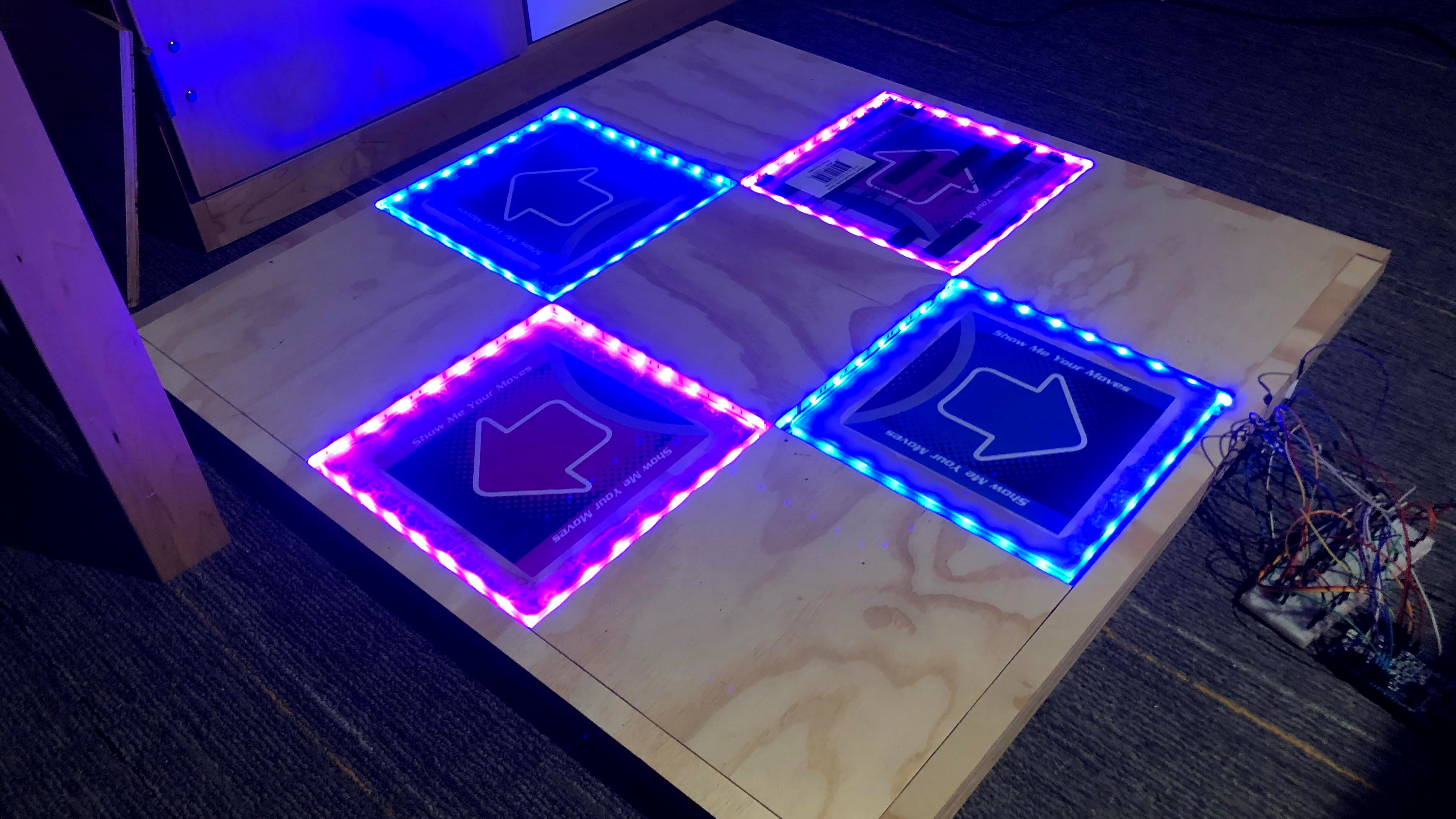 * All prices are listed before taxes, tariffs, and shipping costs. 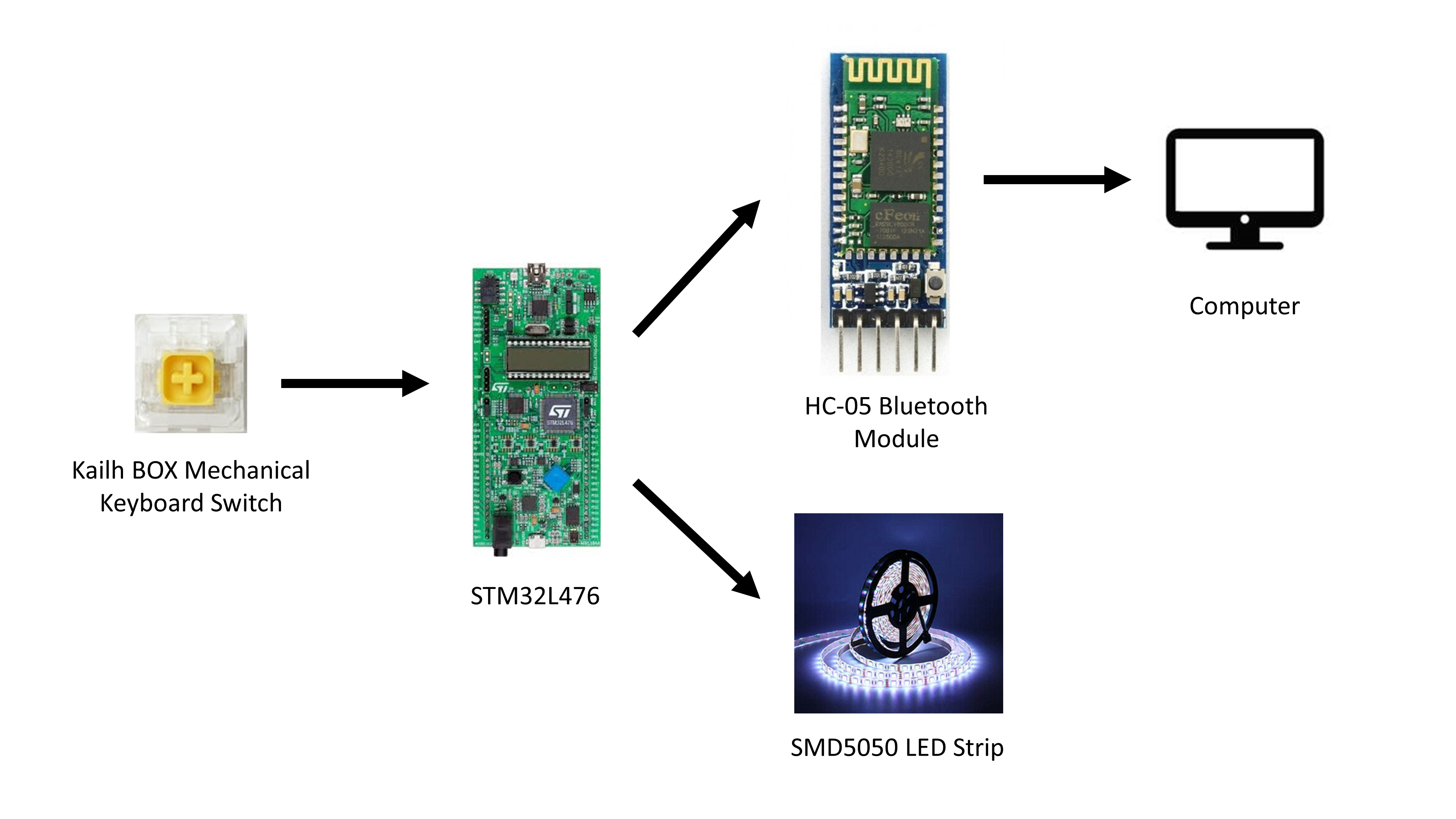 The original project proposal, submitted to GauchoSpace, can be found here.

After an initial review by our TA (Ryan Kirkpatrick), along with some additional research about ways to implement our large button pads, we have decided to make the following changes to our project:

We have received our initial order of mechanical keyboard switches. We were able to wire them like buttons and successfully use them to trigger interrupts by reading standard GPIO input.

The switch was connected as follows:

When the switch is pressed, the two legs will be connected, allowing current to flow. The GPIO input pin reads the voltage after the switch and uses its state to trigger an interrupt.

This circuit was tested using the code from Lab 1, Part B. No changes were made to the code, and the circuit works as expected, so we will move forward with using mechanical keyboard switches to detect steps on our DDR pad.

We plan to perform the following tasks this weekend:

We started this week by completing Lab 3. In doing so, however, we discovered that the HC-05 Bluetooth Module is unable to act as a HID device. Upon researching this issue, we discovered that it is theoretically possible to flash the firmware on the module to allow the module to act as an HID device (see this Instructables article), but doing so would require us to buy an additional breakout board just to flash the new image. We simply didn’t have the time to purchase it, so we looked for other options.

As a result, we decided to forego emulating a Bluetooth Keyboard. We will instead use standard UART communication over Bluetooth, like we did with Lab 3. In order to get our pad presses into the StepMania app, we wrote a simple Python script that will read input from the COM port that the HC-05 is connected to, and emulate a keypress using a library such as pywin32 or pyautogui.

During Wednesday’s lab session, we combined parts of Lab 1B and Lab 3A starter code to use one of our mechanical keyboard switches to emulate the keypress of the character “a” on a computer. The code can be found on GitHub.

We have also started to plan the design and come up with a list of materials that we need. This image shows the preliminary sketches we made during Wednesday’s lab session for the design of the pad. We agreed to purchase the springs from McMaster-Carr and purchase the rest of the components from Home Depot. The exact list of components will be decided over the weekend, when we can create a more exact design.

We started the week by creating the above parts list with all the parts we already ordered. During Wednesday’s lab section, we then researched the hardware materials we needed to purchase from Home Depot, and have added those new materials to the parts list as well. We have also ordered a set of 15 logic-level MOSFETS for driving the LEDs using the GPIO output, which will arrive on Monday.

On Thursday night, we made a trip to Home Depot and purchased all the necessary supplies for our project. We were able to cut our plywood into a 35 inch by 35 inch square base and the 11 inch strips for creating the pads, but due to store limitations on the number and size of cuts we were able to make, we were unable to have their associates make every cut that we needed. As a result, we plan to finish cutting the rest of the board on Tuesday at the UCSB Woodshop in the Arts building.

We do not plan on doing any further work this weekend due to numerous assignments and the 153B midterm on Monday. We will provide new updates after that.

We started this week by getting the rest of our wood cut at the Woodshop. Once that was completed, we spent one night gluing together the borders and corner tiles. We also spent some time fixing our Python script for emulating keystrokes. When playtesting our circuit, we discovered that StepMania does not support virtual keypresses, so we have opted to use osu! from now on. The build stream can be found here.

As we both have other projects that are due this weekend, we won’t be meeting again until Finals week. Our plan for finals week includes finishing the frame assembly (including LEDs and polycarbonate), and finishing our circuit.

We started this week by wiring and soldering the entire circuit to the base of the DDR pad. This includes wiring up the LEDs and mechanical keyboard switches. We printed out DDR pad arrows and glued them to our polycarbonate tiles. Once that was complete, we drilled holes to fit our keyboard swtiches, and finished the assembly of the DDR pad by gluing in the center tile and the final border. We also finished coding our LED strips, though we were not able to test them in this meeting as we were waiting for the glue on the keyboard switches to dry. The build stream can be found here.

In our last meeting, we wired up the final circuit, tested the LEDs, and glued the springs to the base. We then proceeded to play osu!.