The goal of this project is to minimize the time spent waiting to purchase tickets at our cultural student organizations’ annual night markets by automating digital wallet purchases using Android-based kiosks that can instantly detect and accurately dispense ticket purchases.

This idea was originally proposed for this year’s TASA Night Market, which has unfortunately been cancelled due to the current situation. This idea is also based on a previous project in my freshman year where I created a web interface for using Venmo purchases to purchase items on e-commerce stores. 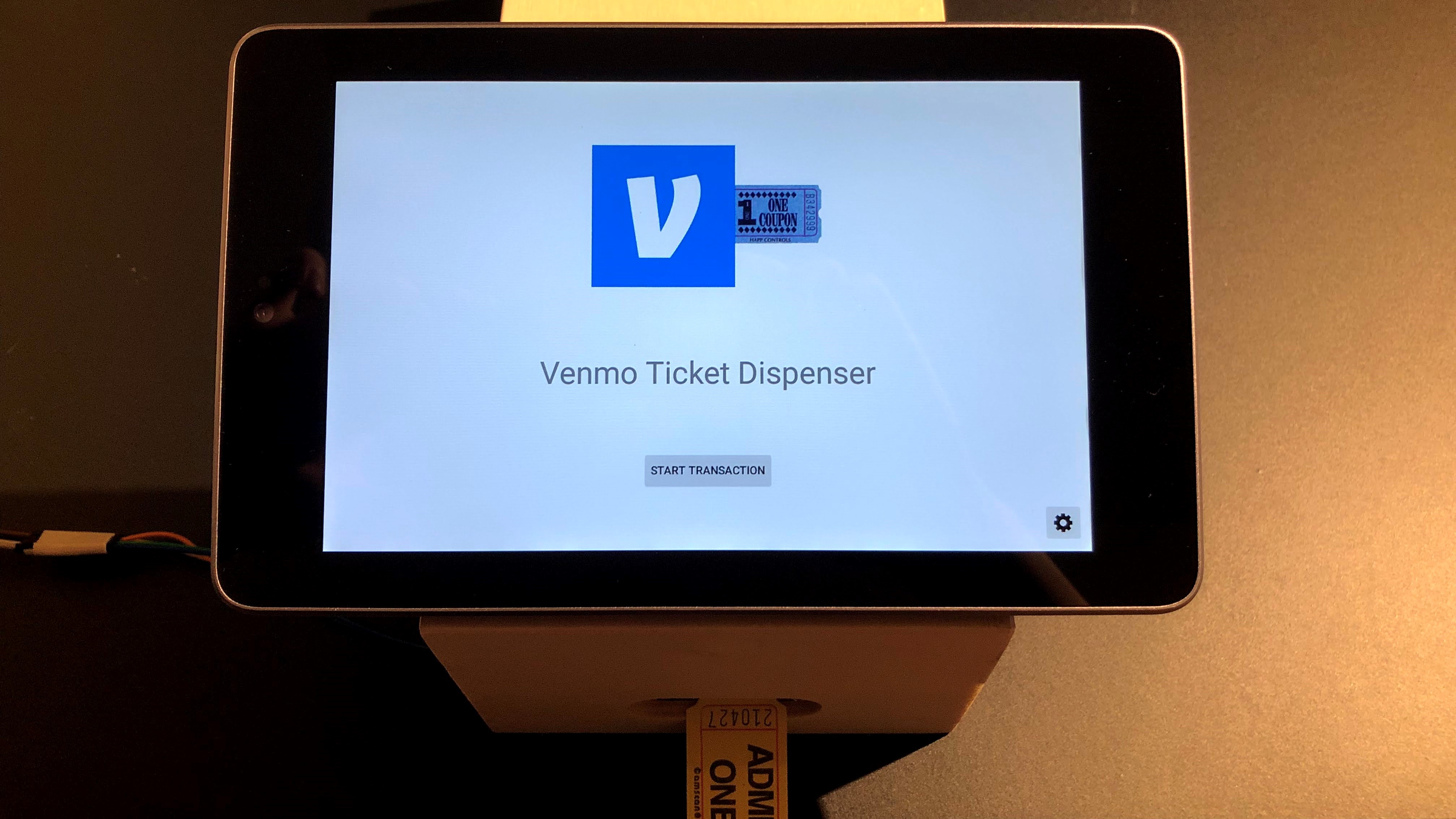 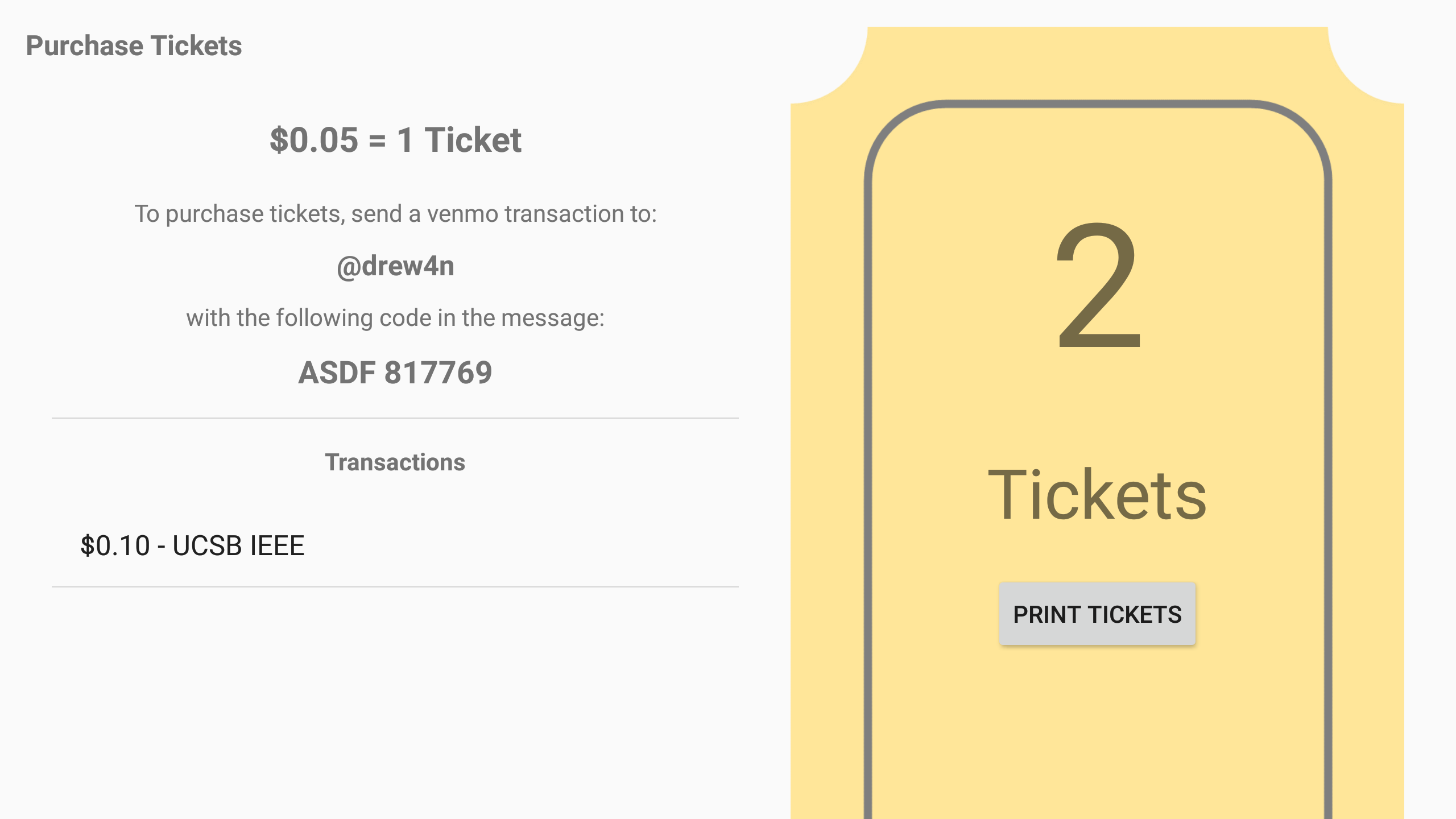 The following parts list reflects parts that will be used to build the application’s accompanying ticket dispenser.

* All prices are listed before taxes, tariffs, and shipping costs.

The circuit for the Arduino-based ticket dispenser is shown below. 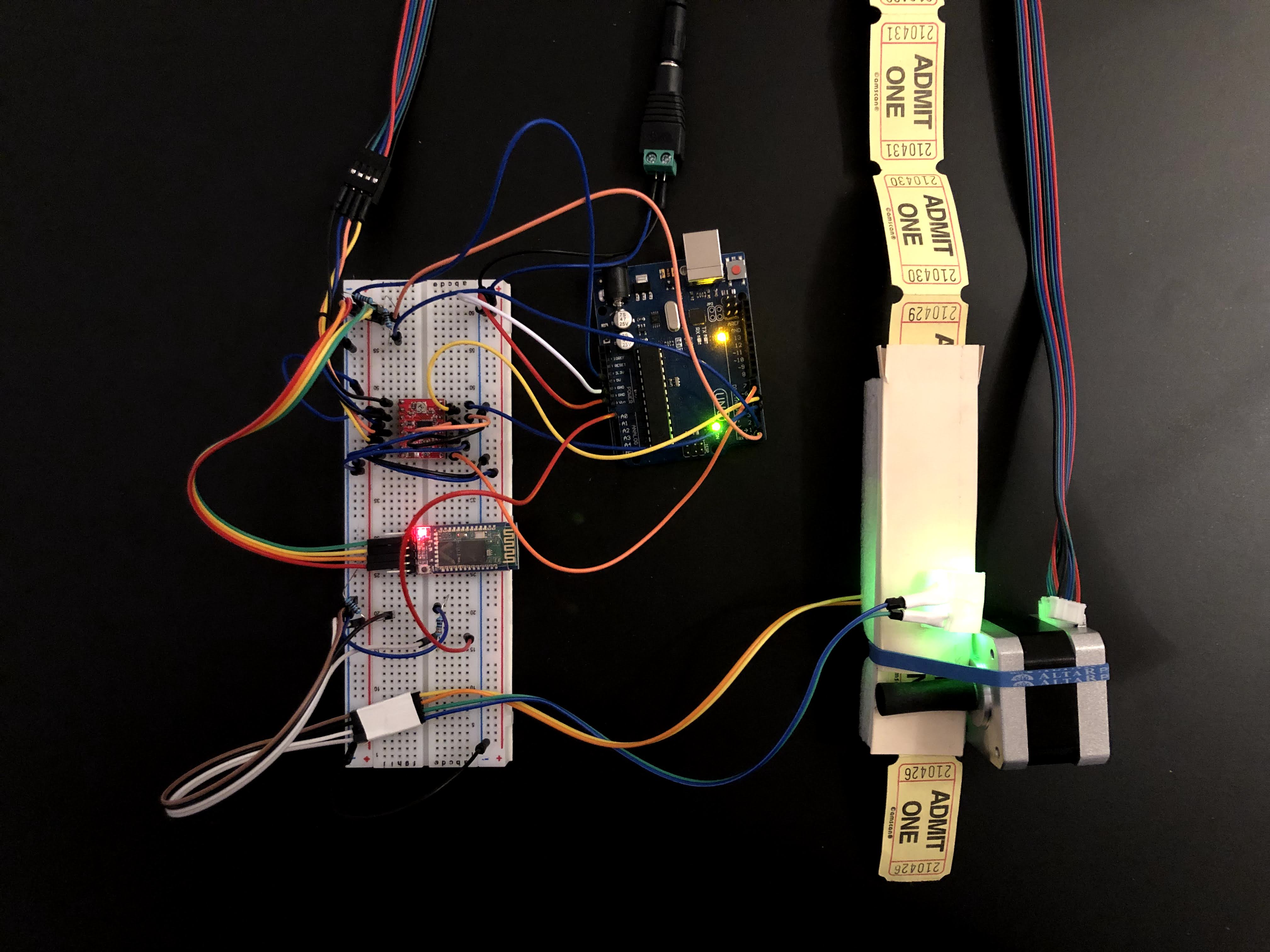 The app consists of three components:

The Android app handles all user interface for this project, and serves as the middleman between the backend server and the ticket dispenser.

The custom-built Arduino Ticket Dispenser is a standalone unit that can receive requests to dispense tickets.

The Node.js backend handles all transaction logic and searching of Venmo emails.

The original project proposal presentation can be found here.

This week was spent flushing out the project idea after an initial review by Professor Isukapalli. The project was presented near the end of class on Wednesday, May 6, and the project proposal slides can be found above.

The rest of this week was spent on getting a base Android application up and running. Since this app is intended to be used in a standalone kiosk environment, I spent a bit of time learning how to hide unnecessary components like the status bar and how to pin apps so they cannot be exited. Due to other projects and the BS/MS application, however, I was unable to spend any additional time working on the application.

I started this week by completing Homework 3. In doing so, I was able to learn how to make HTTP requests to endpoints, as well as continuously listen for responses, both of which are essential components to my application. My project will be set up in a similar fashion to that of Homework 3, where my application will be interfacing with a backend server that will handle the task of scraping the owner’s Gmail account and parsing any Venmo entries.

After completing Homework 3, I focused my efforts on ordering the necessary parts for the ticket dispenser. I decided to keep the ticket dispenser simple and simply dispense tickets using one or two stepper motors, with a photoresistor to detect pulses in light that result from ticket edges passing by. I also decided to add an electromagnet to secure tickets from forcefully being pulled out. The parts have been ordered as of May 17th and should arrive within the next week.

Since the deadline for the BS/MS application was this week, I did not plan on working on the Android app this week. I will continue doing so next week, after my application has been submitted and I am able to catch up on my backlog of assignments.

I started to receive the parts I had ordered for the ticket dispenser. The first part I received was the electromagnet. Upon testing the electromagnet with the Arduino, however, I discovered that the electromagnet I had ordered did not have enough force to prevent tickets from being forcefully pulled out. Since I did not want to wait another week for shipping and spend more money testing electromagnets, I opted to forego the electromagnet, at least for the purposes of this class. When the opportunity arises to deploy this into the wild, I will most likely revisit this.

On the software side, I spent this week learning how to interface with the Gmail API. I looked into using the Gmail API from the following two standpoints:

While performing the email scraping directly in the application would allow the application to run standalone, I began to realize that scalability would be an issue. If this app were to be deployed for actual use at a night market, this app wouldn’t be used alone, as there would likely be multiple instances of this app running concurrently, each on their own kiosk device. This would allow multiple people to line up and make their purchases in parallel, similar to a grocery store’s “Self-Checkout” section. Requiring each instance of the app to parse emails individually would slow runtime on each device, and would likely eat up my Gmail quota, both of which are undesirable for this app.

As a result, I opted to go for the Node backend method. While this does mean that you need a backend server configured to run this application (therefore removing its ability to be standalone), I can configure the backend to process each email only once, caching or storing the processed emails to be picked up later to reduce request times and minimize calls to the Gmail API. Since I already have experience using Node from personal projects and participating as an undergraduate lab assistant for CMPSC 48 this quarter, this change will also help me get up and running quicker and more efficiently.

I received all the parts and spent the majority of this week assembling the ticket dispenser. I had originally hoped to create my own wood casing for my project, but I realized I lacked the tools to do so at home and do not have access to a lab, so I opted to make my project out of Styrofoam, paper, cardboard, and miscellaneous parts I scavenged from Daiso. Definitely not ideal for production, but it serves as a nice prototype. :)

Given the limited resources I have, I redesigned my ticket dispenser mechanism to work as follows:

On the software side, I worked on the implementation of the backend server that would parse my Gmail inbox for Venmo messages. I opted to use the same tech stack as CMPSC 48 this quarter:

My plan of action for implementing the backend is as follows:

Due to the time taken up by Homework 4 and my other final project, I was only able to complete up to step 2. I plan to spend the beginning of next week finishing up the backend.

I began this week by finishing the assembly of ticket dispenser and the development of the backend server. The code for the backend server can be seen in the alu.moe repository. Now that those are complete, I can dedicate the rest of my time to developing the Android application itself.

My plan of action for implementing the Android application is as follows:

Due to my other final project, I am not able to spend much time on this early in the week, so progress will be limited for now. I will continue to work on this over the weekend and into next week, where I will post my final update.

Over the weekend, and up until Wednesday morning, I spent all my time working on the plan of action I had devised the week before.

I started by first designing all the activity layouts and transitions, polishing the user interface until I got approval from others that the interface was clean and intuitive. After the user interface was done, I added support for all the API calls to my backend server. With the help of Homework 3, this was fairly trivial, though I did have to spend some time learning how to manipulate JSON objects in Java and add a JSON string to the body of a POST request.

Once the API endpoints were handled, I moved onto getting Bluetooth communication to work. Thanks to a Stack Overflow post I had found (linked within the code), I was able to analyze how an existing Bluetooth terminal app worked, and incorporate the components I needed to send data over UART to Bluetooth. I had originally hoped to incorporate the Bluetooth connection logic in the same Java class that handled the “Complete Transaction” API endpoint, but I consistently ran into issues when making multiple transactions since I had initiated a new Bluetooth connection with each API call. As a result, I decided to abstract it out into its own service, which now launches on app start and runs in the background.

Once Bluetooth communcation was added, the last component to incorporate was NFC. This was the step where I had the most trouble, since the Android developer documentation did not have much details about how to implement the feature, and Stack Overflow posts were heavily outdated. While testing out some other NFC tool apps on the Play Store, however, I discovered that you can add properties to your application’s manifest file to launch a specific activity on the presence of a specific type of NFC tag. I used the NFC tool apps to discover what type of NFC tags I had (MiFare classic), and registered the security settings activity to launch whenever such a tag was detected. Using intent data, I was able to grab each tag’s serial number, which was then stored in a StringSet shared property that could be validated later on.

On Wednesday morning, I attempted to demonstrate my app live on the Zoom call. Unfortunately, it failed, and this was actually the first time I had seen the application fail at all. I was able to trace this back to an error in my backend, and when I redeployed the backend immediately after the demo, it seemed to work smoothly again. I wish I was able to give a nice live demonstration, but this held me back and I wasn’t able to show anything in the end. However, I did film a comprehensive video demo after, which is now viewable on the top of this website.

I shared this video with the staff of the TASA night markets, and received an overwhelmingly postive response! If we are able to host the night market again next year, they will definitely look into funding the production of more ticket dispensers :)

This app and ticket dispenser was a nice proof-of-concept, but it is still far from being ready for a production environment.

These are some of the features I hope to add or update in future iterations, in no particular order: